Ellen Tamaki Talks Drea and Mic’s Relationship, If She Can Be Trusted, and the X’ers
maart 18, 2020 Ellen Tamaki 0 comments Share:

Ellen Tamaki, who some of you may recognize at Niko from Charmed, entered Manifest at the kickstart of season 2 as Drea, Michaela Stone’s brand-new partner.

It didn’t seem like a good fit at first as Mic was adamant about staying partnered up with Jared, her ex-boyfriend, but overtime, Drea began to prove herself as a trustworthy ally.

She would assist Mic in her cases and raids, cover for her when she needed to “handle something” related to the Callings, and stepped in when Mic went undercover as a druggie with Zeke.

All of that culminated on Monday’s Manifest episode “Carry On“ when the partners exchanged notes, surmised that Jared was an X’er, and Drea went undercover to scoop out the shady bar he attends to get more dirt.

We got to chat with Tamaki about her time on the NBC series, the dynamic between Drea and Mic, what it’s like working with Melissa Roxburgh, and well, we tried our best to get as much scoop about the remainder of the season as possible.

Check out the interview below:

Your character Drea and Mic make a very dynamic duo… tell us a little about that.

When I first came on the show it was a mystery. You know, we’ve wrapped the season, so I know what goes on for the rest of the season, but when it first started they wanted her [Mic] to have the new partner and they wanted some new faces in the precinct, and they’re like well what better way to do that then to kind of like create like this new relationship for her [Mic] that isn’t romantic.

I love seeing women on TV who have more relationships than just romantic ones, and I think there can be something so dynamic and professional about female friendships and that’s kind of what we have been discovering throughout the season is the way that these two characters get along and learn from each other. Drea comes in at the beginning and is just so infatuated with Mic and is trying to get Mic to warm up to her a little bit.

END_OF_DOCUMENT_TOKEN_TO_BE_REPLACED

Clearly influenced by the mystery of Malaysia Airlines Flight 370, in Manifest, when Montego Air Flight 828 landed safely after a turbulent but routine flight, the crew and passengers were relieved. Yet in the span of those few hours, the world had aged five years and their friends, families and colleagues, after mourning their loss, had given up hope and moved on. Now, faced with the impossible, they’re all given a second chance. But as their new realities become clear, a deeper mystery unfolds and some of the returned passengers soon realize they may be meant for something greater than they ever thought possible.

Ward-Hammond will play Captain Kate Bowers, the newly appointed captain of Michaela’s (Roxburgh) precinct. From a long line of cops, she’s direct, by the book and doesn’t suffer fools.

Ward-Hammond recently played recurring roles in Fox’s Star and Claws on TNT. In film, she starred as caretaker Laura in the critically-acclaimed Loving, and in the indie drama Strange Weather with Holly Hunter and Carrie Coon. Ward-Hammond is repped by Alexander White Agency.

Tamaki was most recently seen as series regular Niko Hamada on the CW reboot of Charmed. Film credits include We Only Know So Much, The Drowning starring Julia Stiles, the upcoming Inez & Doug & Kira, Valentina (HBO) and web projects, Dichos and The Holdouts. She is represented by CESD and Anthony Calamita at AC Management.

The original CHARMED series ran on the WB for eight seasons, 1998-2006. It concerned three sisters who discovered they were witches, each with their own powers. When united, they had the Power of Three.

Now The CW has its own new version of CHARMED, airing Sunday nights. Here, sisters Mel (Melonie Diaz) and Maggie Vera (Sarah Jeffery) discover both their powers and the fact that they have a half-sister, Macy (Madeleine Mantock), right after the death of their mother.

Ellen Tamaki plays police detective Niko Hamada, who is in an on/off romantic relationship with Mel. After a rough patch, things had started to go well – until Mel had to magically change the timeline to protect Niko. Now Niko doesn’t remember they were ever involved.

Niko is Tamaki’s first major onscreen role, following a stage career. She has several feature films coming up, including WE ONLY KNOW SO MUCH, SEARCHING FOR SALLY MAE and INEZ & DOUG & KIRA.

What can you tell us about Niko Hamada?
Niko Hamada is the detective in the town. Niko is also Mel’s girlfriend, and I think that, because she’s good at her job and really intelligent, two of the things that I really appreciate about this character and this woman, she probably has a hunch, because this relationship is going really well, the two of them are really close, and Niko is doing a lot of investigating, and I think she’s got a feeling that something magical may be up.

Do you know if Niko may develop her own magical powers later on?
I don’t know, but I really want them so badly [laughs].

What would you like to be able to do?
So I’ve always loved shape-shifting and transfiguration, because I feel like you kind of get the best of both worlds, like, you can be invisible and be a fly, or you could fly and be a fly. You could do all of those different things any time you want. You could be a whale. You could do any of that. And they [the producers] were saying they want to bring in all different kinds of mythologies. Witches are Shakespearean. The idea of three witches has been around for so long, I think you can tie that in, in so many different, exciting ways. We’re just scratching the surface now.

Were you a fan of the original CHARMED?
Definitely. I wasn’t allowed to watch it [laughs]. I’m the oldest, and I have younger siblings, and I was young enough that my mom didn’t really let me do BUFFY and any of that quite yet. So I’ve actually caught up with it – my sister and I have binged it since, but yeah. I’ve seen a bit of it.
END_OF_DOCUMENT_TOKEN_TO_BE_REPLACED 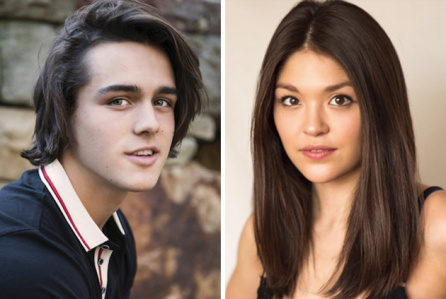 Penned by Jessica O’Toole and Amy Rardin and created with Urman, the Charmed reboot revolves around three sisters in a college town who discover they are witches. Between vanquishing supernatural demons, tearing down the patriarchy and maintaining familial bonds, a witch’s work is never done.

Gillespie will play Brian, Madison’s (Jeffery) high school boyfriend who still carries a torch for her. Tamaki will portray Nico, a detective on the Hilltowne police force whose romantic relationship with one of the sisters complicates her investigation.

Gillespie next will be seen in the feature Speed Kills opposite John Travolta for director John Lussenhop. He also recently wrapped the Patty Jenkins-directed TNT miniseries One Day She’ll Darken, opposite Chris Pine. Gillespie is repped by Primary Wave Entertainment, Vanderwerff Talent and Meyer & Downs.

Tamaki is repped by CESD and AC Management.