Alyssa Milano and Holly Marie Combs made “Charmed” fans’ dreams come true when they guest starred as two sisters on an episode of “Grey’s Anatomy” earlier this month. The special “Cast From the Past Week” installment of the popular ABC medical drama reignited the reunion conversation among those viewers longing for the Power of Three to set them free.

And Milano isn’t shooting down the possibility.

“I mean, Holly and I talk about ‘Charmed’ movies a lot, you know,” the “Insatiable” star told Access Daily hosts Mario Lopez and Kit Hoover. “Because they have the new ‘Charmed,’ which is on The CW, and it’s a very different storyline…”

Here’s where Hoover interjects to say The CW’s reboot, which is currently in its second season and produced by CBS TV Studios (the studio with the rights to “Charmed”), is “not the same” and Milano agrees: “It’s a different show and it felt like they were trying to capitalize off the name but not continuing on the storyline or the legacy. So it was tough.”

“But we have been talking about maybe doing some films for Netflix,” she added. “And so I think that would be really fun and I think it’s a great way to celebrate our fans that have stuck with us for such a long time but still give it new blood.”

Representatives for Netflix and CBS TV Studios did not immediately respond to TheWrap’s request for comment.

Alyssa says that when she reunited with Holly for the “Grey’s” episode they “did not miss a beat.”

“It was like we were at work yesterday doing ‘Charmed,’” she said.

In reality, it’s been 12 years since we said goodbye to the series, which ran for eight seasons from 1998-2006 on The WB and later The CW. Milano and Combs starred on the magical drama as sisters Phoebe and Piper Halliwell, with Shannen Doherty playing their eldest sister, Prue, on Seasons 1-3 and Rose McGowan taking over as the third lead in Season 4, cast in the role of Paige, their half-sister.

“We had so much fun,” Milano says, looking back on “Charmed.” “I mean, you don’t take yourself too seriously on that show because we were battling demons every day in ridiculous costumes, you know what I mean?” 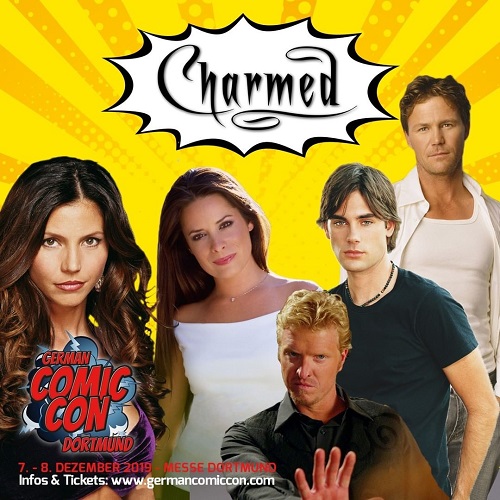 “Charmed fans… you will not be mad.”
This weekend, Holly Marie-Combs will be attending Wizard World Sacramento in Chicago alongside her Charmed co-star – and on-screen love interest – Brian Krause to celebrate the legacy of the iconic fantasy series.

Although the event spans three days (September 20-22), Combs told fans on social media that she will only be available on the Friday and Saturday due to work commitments, saying: “Charmed fans… you will not be mad at it. Like at all.”

Combs’ message has led to fans speculating whether Charmed will be receiving a reunion or comeback in some form, with one writing on Twitter: “What?!? Is there a Charmed movie in the works?!?”

“All Charmed fans wondering and waiting to see if it’s something #Charmed related,” said another. “Have you all ever considered having a Charmed reunion? I would love to at least see you all together.”

One fan asked whether Combs would be making a special guest appearance on the Charmed reboot – which aired on The CW last year (it has been renewed for a second season) to which she simply responded: “No.”

A reunion is unlikely; since the show ended in 2006, the original cast members, Combs, Shannen Doherty, Alyssa Milano and Rose McGowan, haven’t had a sisterhood as strong as their on-screen counterparts.

However last year, when the American actress – who played Piper Halliwell for its entire eight season run – was asked if a ninth season with the cast was possible, she replied: “A whole season? I don’t know if a whole season, but maybe something.”

When asked by a fan if a movie was possible, she said: “Possibly. I say never say never.” Brian – who played Leo Wyatt on the series – agreed with Holly and claimed it’s “possible”.

Airing for eight seasons from 1998-2006, the series focused on the most powerful witches in the world who use their combined “Power of Three” to vanquish demons, warlocks, all evil-dwellers, etc.

At 178 episodes, the show became the longest running hour-long television series featuring all female leads (until it was surpassed by Desperate Housewives in 2012) and the second-longest drama broadcast by The WB network.

The show developed a cult following, and is often described by critics as one of the most influential television shows of all time.

Because of its critical acclaim (and because it was the second most streamed show of 2012, six years after the finale), Charmed received a reboot by The CW, which aired its first episode on 14 October 2018.

An equestrian estate in the guard-gated suburban Los Angeles, Calif. enclave of Bell Canyon, long owned by veteran television actress Holly Marie Combs, has hit the market at $2.2 million. Combs, whose dozens of professional credits include long runs on “Picket Fences” and “Charmed,” and, most recently, Freeform’s cult favorite “Pretty Little Liars,” purchased the just over one acre semi-rural spread almost 20 years ago for $780,000. Listed with Kevin Godley of Pinnacle Estate Properties and described in marketing materials as “a designer-upgraded rustic home” that is perched privately above the street at the end of a tree-shaded driveway where it backs up to protected lands, the just slightly more than 5,000 sq. ft. home has five bedrooms and 3.5 bathrooms.

The foyer acts as a central traffic spine for the main floor and steps up through an archway to a casually appointed living room anchored by massive stone fireplace painted chalk-white under a vaulted and beamed, exposed wood ceiling. Polished travertine floors flow from the foyer and dining room into a not especially large kitchen with two-tone wood cabinets, high-end appliances and an adjoining breakfast area that opens the yard. In the family room, plush sofas sit on a shag rug, a glitzy quartet of delicate, bowl-shaped crystal chandeliers hang from rugged, hand-hewn wood beams across the ceiling and barn-style double doors slide open to a roomy bonus space well suited to a games lounge. There’s a main floor bedroom and bathroom for staff or guests and three more family bedrooms on the upper floor along with an owner’s retreat that comprises an ample bedroom with sitting area and massive stone fireplace, a slender balcony, a walk-in closet and an ample bathroom with tumble travertine floor tiles.

A quaint porch wraps around the front of the house with a leafy, elevated view into the surrounding treetops while the backyard areas, which include a courtyard-like space with a central fountain, are mostly unkempt and charmless with a patchy lawn and an elaborate children’s play structure on a dusty stretch of dirt. The property’s extensive equestrian facilities include a four-stall horse barn well-equipped with water and power, a large turnout and a training ring, and, perhaps most desirable of all, direct trail access to the Santa Monica Nature Preserve.

Since 2010, when records show it was acquired for an unrecorded amount, Combs has also owned a stone-walled and metal-roofed ranch-style architectural residence on more than 25 scrubby and remote acres near itty-bitty Blanco, Texas, in the Hill Country area about 50 miles west of Austin.

Roughly 30 heavily trafficked miles northwest of downtown L.A. and a short six-mile drive to The Commons at Calabasas shopping and dining complex, Bell Canyon is a slightly farther flung, much less ballyhooed and not as pricey alternative to the nearby celeb-soaked Hidden Hills enclave. Nonetheless, the affluent suburban enclave boasts a fair number of sports and showbiz-related homeowners. Actress/activist Alyssa Milano is a longtime property owner as is “Tonight Show” bandleader Kevin Eubanks, actor Jamie Farr and comedian/TV host Joe Rogan, who upsized his Bell Canyon digs last year with the not quite $5 million purchase of a nearly 9,000 sq. ft. ultra-modern mansion. Early last year Shaquille O’Neal plunked down a bit more than $1.8 million for a five-bedroom home and late in 2018 “Claws” star Niecy Nash dropped a bit more than $2 million for a six-bedroom Mediterranean spread.

Depending on your age, you may know Holly Marie Combs as Piper on “Charmed,” Ella Montgomery on “Pretty Little Liars,” maybe as Kimberly Brock on “Picket Fences,” or perhaps from a few movies along the way, including one in which the charming actress played a villain!

However you know her, you know her. She has a distinct look and an even more distinctive voice, and a knack for creating memorable characters.

Her real-life role is taking center stage with fiancè, Mike Ryan, and concentrating on special moments with family and friends. Combs has three sons, 10, 12 and 14, and a 16-year-old stepdaughter, so there’s always people around and something going on, which is just how she likes it. And right now, Ella Montgomery is the character she most identifies with because she is a mother, too. Do the children think of her as a star?

“I’m just Mom to them. They don’t pay attention to my career,” Combs said. “Or maybe if we go to the grocery store and someone says something to me, the kids are like, ‘oh, yeah.’ The two older boys have come to Comic Con events with me just to meet somebody cooler than me.”

She’s the first to admit that the acting life can take a toll on family life. “On ‘Charmed,’ we would put in 14-, 16-, even 18-hour days, six days a week for nine months of the year,” Combs said. “It was a lot. As the years went by, we figured out how to be more efficient and got it down to five days a week.”
END_OF_DOCUMENT_TOKEN_TO_BE_REPLACED

Alyssa Milano says her home has been spared by a Southern California wildfire that forced her family to evacuate.

The actress tweeted Saturday that her house “is still standing” a day after she and thousands of others were forced to hurriedly evacuate because of the fast-moving fire.

Milano on Friday asked for help evacuating her five horses, later updating that they and her family were safe.

Numerous stars are waiting to learn the fate of their homes and prized possessions.

Rainn Wilson tweeted Saturday that flames came within about a dozen yards of his home, but it was spared. Lady Gaga tweeted late Friday that she did not know the status of her home.

Authorities have said more than 150 homes have burned in the fire and that number would likely rise.